Live At The Forum

2020 release. Following up the Grammy nominated album Run Home Slow, Australian soul band The Teskey Brothers are back with their live album Live at The Forum. The album was recorded on tape during their two-day residency at the iconic Forum Melbourne in Australia this past November.
“We thought we’d try and record a live album with a tape machine, which is madness, but that’s our format so it’s the way we wanted to do it”, says Sam Teskey.
Live At The Forum features songs from the band’s two critically acclaimed albums, Run Home Slow (2019) and Half Mile Harvest (2017), as well as a special cover of John Lennon’s ‘Jealous Guy’. 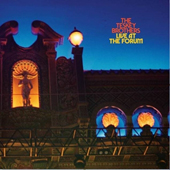