King Of This Town

There is an embarrassment of talent in BARK, given that the group are comprised of three renowned singer/songwriters: Tom Wilson, Stephen Fearing and Colin Linden, who doubles as producer here in typically deft fashion. They take turns on lead vocals (usually on their own compositions), but are especially effective when two or all three harmonize, as on rousing first single "Cold 100 Miles" and "Kick My Heart Around."
Each member tends to draw upon a slightly different genre (swamp-rock for Wilson, blues for Linden, folk for Fearing), resulting in a diverse, but never incoherent collection. The album's first track, "Hard Road," is a riveting Wilson-driven tune with a Southern gospel feel accentuated by the backing vocals of gospel stars the McCrary Sisters. The closing cut, "Grace," is a reflective elegy featuring Fearing's gentle vocals, strings and a plaintive harmonica.
In between is a smorgasbord of songs with highly varied tones and tempos, from the cosmic country-rock vibe of "Medicine Hat" to the potentially anthemic, Linden-penned title track. BARK collaborate with co-writers here, including Janice Powers (Linden's wife), Thompson Wilson (Tom's son), Hawksley Workman, and its ace rhythm section, Gary Craig and John Dymond. Keyboardist Kenneth Pearson, multi-instrumentalist Jim Hoke and Powers also make tasteful instrumental contributions. These Kings rule. (exclaim.ca) 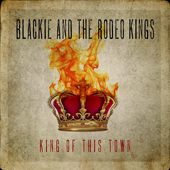