Two legends combine for an inspired journey ~ Stephen McCarthy of the Jayhawks, Danny & Dusty, the Dream Syndicate and his own band the Long Ryders with Carla Olson of the Textones, Gene Clark, Mick Taylor and other collaborations deliver an exciting album of original songs and a few select covers. In the latter category there's Don't Talk To Strangers by the Beau Brummels and Gene Clark's I Remember The Railroad.
"Night Comes Falling" comes on the heels of McCarthy and Olson’s two songs on the 2022 BMG multi-artist album "Americana Railroad" where they offered a new version of Stephen’s “Here Comes That Train Again” as well as Gene Clark’s “I Remember The Railroad.” (Carla produced seven additional tracks on the album including those by Dave Alvin, Rocky Burnette, Robert Rex Waller Jr. and John York.) "Night Comes Falling" is a testament to their individual and combined talents and was recorded at Robbie Krieger’s studio, Horse Latitudes, in Glendale, CA, It was produced by Carla, Stephen and Mikal Reid. 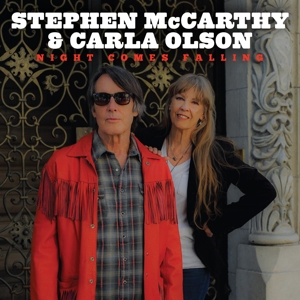