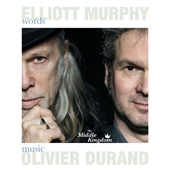 The Middle Kingdom is a dramatic spoken word with music album comprised of a selection of poems from the ELLIOTT MURPHY collection of the same name. Read by Elliott himself, with accompanying music composed and performed by his long time musical partner OLIVIER DURAND and mixed and produced by Gaspard Murphy, the result is a surprisingly powerful album whose provocative lyrical images are lifted to yet another dimension when combined with sympathetic and moving musical themes. The idea for this unique project was born during the Corona virus confinement in France when it was impossible for these two long-time musical collaborators to perform or record together as Olivier Durand lives in Le Havre and Elliott Murphy in Paris. Elliott proposed that Olivier make a selection of poems from his second book of poetry The Middle Kingdom that he could relate to both musically and lyrically and after deciding upon 18 titles he composed and recorded accompanying musical themes in his home studio in Le Havre. After contributing his own musical ideas to the title cut, producer Gaspard Murphy mixed the final album with state of the art HD sound. The subject matter of the poems themselves go from rock ‘n roll (“On The Death of Prince” & “Last Night I Dreamed About Lou”) to the very autobiographical “The Middle Kingdom“.