STACIE COLLINS is a DAMN GIRL on her new album! 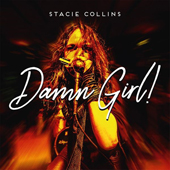 „We’ve finally completed the 6th Stacie Collins album titled DAMN GIRL! We started recording DAMN GIRL! while on tour back in May with my friend Sir Martin Ekelund at Lemon Studios in Sweden and finished it at my home studio in Nashville. This album is special because for the first time I was able to use my touring band The AL-Mighty 3 featuring Jon Sudbury, Ola Göransson and Al Collins in the studio. Get ready for a ride that has lots of twists, turns, and a few surprises. I think it’s the most diverse record we’ve ever made. All the songs were written by Al and myself along with a few collaborations with Jon and Ola.“ (Stacie Collins)

Kommentare deaktiviert für STACIE COLLINS is a DAMN GIRL on her new album!