AD VANDERVEEN declares on his new Blue Rose album: I Was Hank Williams !

Reminiscent of works like John Steinbeck’s Travels With Charlie or Bruce Springsteen’s Nebraska, the new album I Was Hank Williams by songwriter and singer Ad Vanderveen is a personal quest and an adventure. It is a quest for self-knowledge leading to spirituality, and an investigation into the origin of a dream. A dream that is old and has led the writer down a long road of countless songs and many records. It has a strong fascination for the new world, and is anchored in the old one. Remarkable of Vanderveen’s work may be the insights and influences of Eastern philosophy, which he has studied and practised for years, that shine a special light on different subjects, within a musical context of a distinct Western character.

Writing is like breathing for Ad and, although it doesn’t come quite as easy, it is a bare necessity for him, and so is playing. He is undoubtedly one of the most prolific writers in the genre and his work is considered to be of a consistent high level by fans, critics and peers (recently none other than Van Morrison personally invited him to be his opening act). Almost every year a new collection of AV songs in a different sphere and setting presents itself as a CD.

This year there’s even two: Where the previous releases, the diptych of Worlds Within (2017) and Denver Nevada (2018) were characterized by somewhat more extensive production and arrangements than is Vanderveen’s usual MO, for I Was Hank Williams there was a more minimal, direct and diverse approach. Voice and guitar, poem and music, remain center stage and keep the listener close to the content of the songs. Around that, charming and effective embellishments of horn and string arrangements, harmony vocals and old rootsy string instruments are weaved throughout the album, as well as ambient soundscapes enhancing the songs‘ atmospheres. 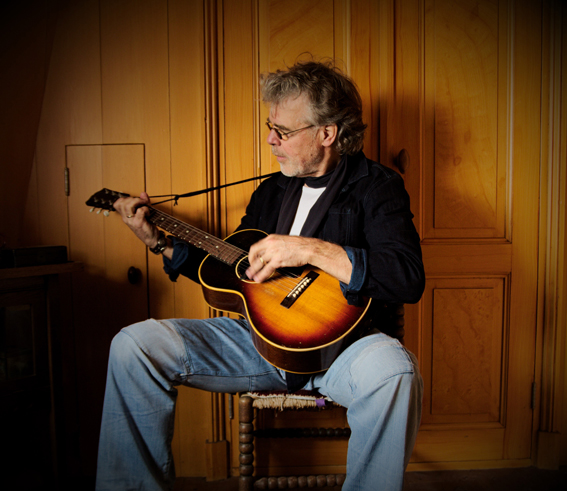 According to Ad: ‚A song should be able to stand on its own feet and come across without any bells and whistles, otherwise I don’t see the point in what I’m doing. It strikes me as disproportionate how much music seems to revolve around production, arrangement and even marketing these days. It’s like the packaging is more important than the content, while a song in itself is already something magical and miraculous; a poem and a message with a melody, a rhythm and a title – something complete with a distinct own identity, like a world you can live in‘.

It is this world the listener can be drawn into like in a very personal story, as in old folk tradition, without frills or distractions, and is able to visualize his or her own images and spheres, like reading a good book. As do many of his predecessors, old masters like Bob Dylan, Van Morrison or Neil Young, Ad Vanderveen has an instinctive way of working: „The Muse is a very fleeting and evasive thing and you have to catch it while it’s there. This goes for all of these recordings; they were made right after or sometimes even during the writing of the song, in the stage where the images and pictures are fresh and lively and close to their origin. Sometimes this was in a studio and sometimes in special locations like an old auditorium, or even the cave of Pythagoras. That Muse is certainly also present in the ambient spheres and sonic souvenirs of special moments that accompany these songs. A highlight being reuniting my mom and dad musically, on church organ and ragtime piano respectively, in a little piece called ‚Live and Give It All‘.“