After eight years RICH HOPKINS & LUMINARIOS are back with a stunning live album! 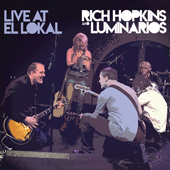 Live At El Lokal
CD
€ 14,90*
For three decades now, the name Rich Hopkins has been synonymous with dusty, guitar-drenched desert rock from the American southwest. This is true for the Tucson, Arizona musician’s regular albums and even more so for his irresistible live performances. Backed by the Luminarios, a tight band, Hopkins plays desert rock like no one else, making the guitar sing and howl and time stop in his inspired solos. Needless to say, audiences are right there with him in a heartbeat.

Rich Hopkins & his Luminarios have toured Germany and the neighboring countries more than 20 times since 1997. „El Lokal“ in Zurich, Switzerland has long been one of their favorite venues. Recordings from two shows at „El Lokal“ are now available on CD. Ten of the album’s 13 songs – which touch on many stations of Hopkins‘ career – are from a concert in May 2017. The three others are from a 2015 appearance.

The CD with a playing time of 72 minute sounds absolutely brilliant and reflects the vibe of a Luminarios concert.

This release is limited to 1.000 copies!

Kommentare deaktiviert für After eight years RICH HOPKINS & LUMINARIOS are back with a stunning live album!