Cody Jinks will release his latest album, After The Fire, Oct. 11. The project, on Jinks’ own Late August Records, is the followup to his 2018 critically acclaimed album Lifers.
The 10-song collection will be the debut offering from Jinks’ own label. The country outlier has sold more than 300,000 albums through his tenacious grassroots approach and currently streams 40 million songs per month.
Fresh off of his recent sold-out (in one hour) show at Colorado’s famed Red Rocks Amphitheater, Jinks continues to tour heavily with two consecutive nights this week in Boston, upcoming shows with Lynyrd Skynyrd, and upcoming dates in Detroit, Indianapolis, Minneapolis, Dallas, Fort Worth, Oklahoma City, Nashville, Pittsburgh, and the West Coast. He is also gearing up to announce the formation of the Official Cody Jinks “Fam” Club. 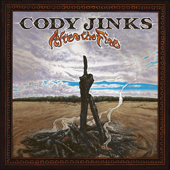