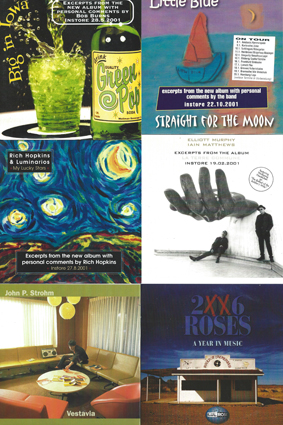 Now since the Black Friday/Black Week/Cyber Monday craziness/hype is over we are starting a little season campaign. Not very exciting, though, but not really uninteresting for Blue Rose fans/customers/friends. Little story ahead: In the early days of the label we once in a while sent out special promotion CDs to our media partners. These CDs (in a cardboard sleeve like our recent Blue Rose Collection CDs) didn’t contain the complete songs of the CDs but instead personal comments to the songs of band members. The following promotion CDs are included in this campaign:

Included in this campaign is the promo issue of „Vestavia“ by JOHN P. STROHM which had been released on April 6, 1999 with the catalog number BLU CD0190. The record doesn’t contain comments but the complete album which is out of print for a long time. Last but not least we have a few copies available of the promo CD 2XX6 Roses – A Year In Music from 2006. It contains songs of all the albums we had released in the year 2006 – 26 songs.

All these CDs are not available to purchase, one of these items can be chosen with each order and will be added for free to the shipment. Just add the album to the comments field in the shopping cart before submitting the order. This offer is limited while supplies last.