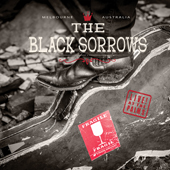 In late March we had announced a new Blue Rose release by THE BLACK SORROWS, only available as a digital album through download stores and streaming services: Live At The Palms. A physical CD was announced only available at the band’s upcoming European tours in spring and the fall. It’s now also available on CD through the Blue Rose web store – exclusively! No other store is offering the CD!
Live At The Palms was recorded on October 26, 2018 at „The Palms At Crown“ in Melbourne, Australia. The album features nine songs, seven taken from the band’s latest studio release, Citizen John. The remaining tracks are covers by The Coasters („Down Home Girl“) and „The Honeydripper“ by Joe Liggins & The Honeydrippers.